Dubai ought to be the main place that comes to mind when speaking of anything opulent, extravagant, extravagant, and often unbelievable, especially when it refers to architecture. With its nearly 3,000-ft height, the Burj Khalifa may remain the world’s tallest building in the coming years, but the next upcoming project in Dubai is focused on 1.261 billion feet above; the Moon.

As a result, tourists will soon no longer need to spend millions of dollars to take a trip to the moon, nor to spend the night there (at least figuratively). A massive moon-shaped resort is coming soon to Dubai, and, based on its infrastructure and eye-watering expenditure, guests can expect the next level of luxury that is unparalleled.

Despite being a part of the UAE, Dubai is a global city that attracts gazillions of investors and intriguing visitors each year. They are traced to the city’s high-tech skylines, massive shopping malls, innumerable leisure activities, and, of course, its plethora of world-class luxury resorts.

So, without further ado, let’s reveal all the details about Moon Resort Dubai that you’ve been eager to know; keep reading to learn more!

With its towering buildings and luxury resorts, Dubai certainly serves as a showcase for cutting-edge design and architecture. There is still more to discover in this city than you can imagine!

Moon World Resorts Inc; a Canadian architecture firm, has proposed a $5 billion moon-shaped destination moon world resort for Dubai. The company plans to construct the 224-meter-tall luxury lunar complex in Dubai and hopes to have it unlocked in 48 months. Moon world resort anticipates bringing in $1.8 billion in revenue annually and hoping to draw 2.5 million visitors annually.

Since the moon resort in Dubai is a simulation of the Moon and provides visitors with an authentic lunar surface to experience, it is intended to provide enthusiasts with an appealing and realistic space tourism experience.

The Dubai Moon Resort, as we’re calling it, is a Canadian architectural firm led by Moon World Resorts that aims to give space-loving travelers the most realistic interstellar adventure possible. Guests will witness what it would be like to stroll on the Moon while on the resort’s lunar-like surface, known as the “lunar colony,”  they will still be constrained by gravity, we assume. 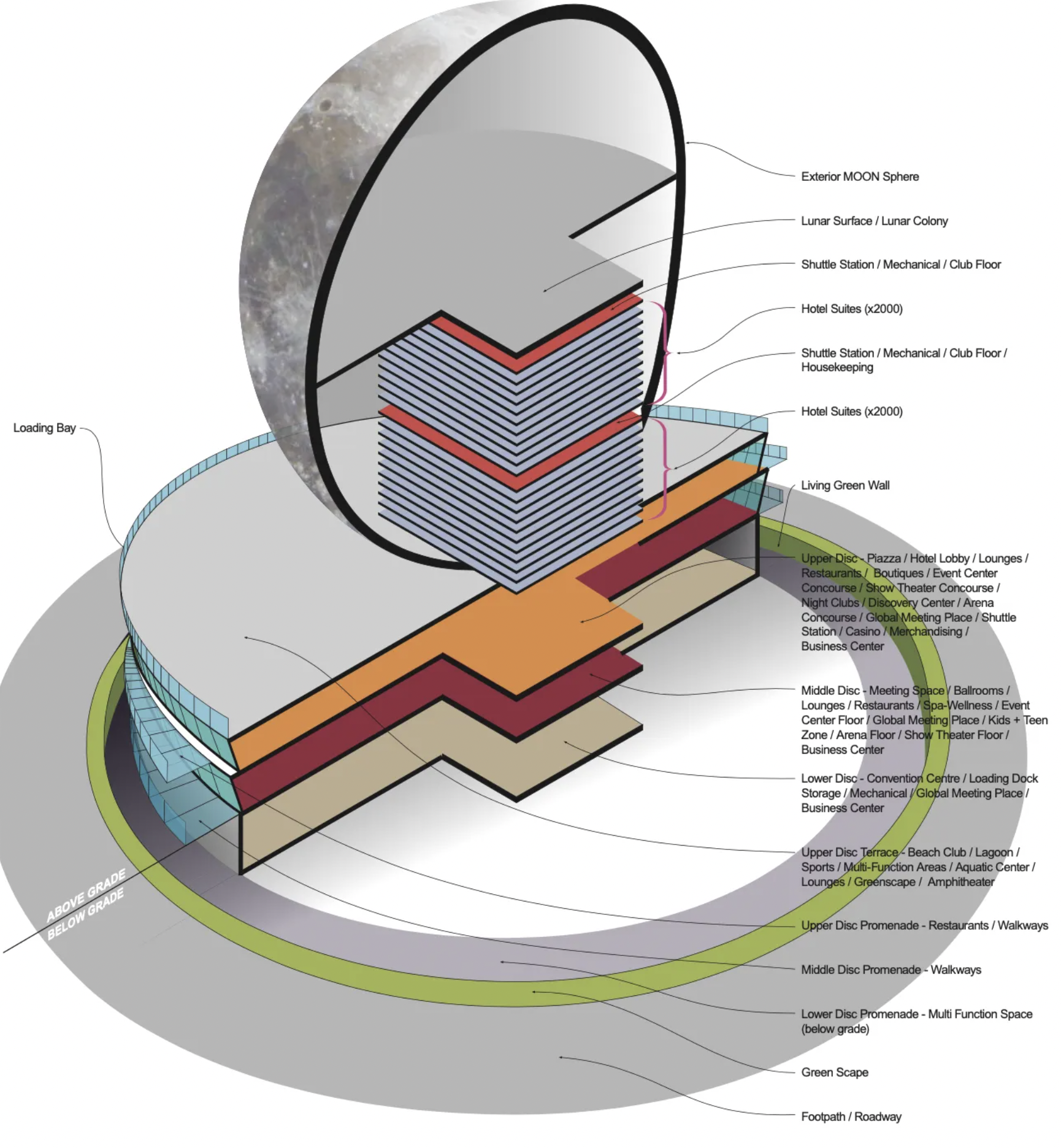 Furthermore, the astounding 10-acre resort will feature a wellness center, conference hub, cafés and nightspots, and more, with a strong emphasis on space exploration, hospitality, and innovation. It will also comprise 300 private residences known as ‘Sky Villas,’ which will be available for purchase. Everything inside the massive crater-shaped lunar surface; is the Moon World Resort.

While more specific aspects are sorely missing because the project is still in its early stages and will take approximately two years to complete. There are also sky villa residents to figure out. As part of their residency agreement, Sky Villa residents will have access to a private members’ club inside the property, as well as other perks. There will also be the option to take advantage of the hotel’s in-house “moon shuttle” service for transportation around the resort.

The Doors of Moon Resort Will Open On…

The Dubai moon resort is expected to open in 2025 and has a capacity of “at least” 2.5 million guests, though the original report did not specify whether this number would be sustained over a six-month or a year-long period. We’re sure you’re curious, but Moon World Resorts has not confirmed whether or not a zero gravity experience is a plotted attraction.

Last, You Know What!!

The “Dubai Moon Resort” structure will be over 735 feet tall when it is fully completed, contributing to Dubai’s impressive array of sky-high structures that have evolved into its most noticeable features. Sandra G. Matthews and Michael R. Henderson, co-founders, have stated that they want to “strongly plant the UAE flag at the leading edge of space exploration.”

They anticipate that the mega-resort “Dubai moon resort” will ‘double’ annual tourism statistics in Dubai, which already ranks among the world ‘s hottest destinations. Additionally, Matthews and Henderson confirmed that over the course of the next ten years, “up to four” additional similar “moons” will be constructed in the Middle East and other parts of Asia.

According to Henderson, these moons could be coming to any of the countries below:

Here are the following structure details, you may get impressed to know: